With her "7 Colours Project" Monica Rotgans gives an overview of the use and meaning of colors throughout the centuries. Now the (Dutch) book "Blue Green" is released. The folowing book will be about "Red, Yellow and Earth Colors" and later about "Black and White".

Here some parts, translated, from a news article on 'NOS News' by Lambert Teuwissen, 18 September 2016: "Now I see just faded art in the museum" : 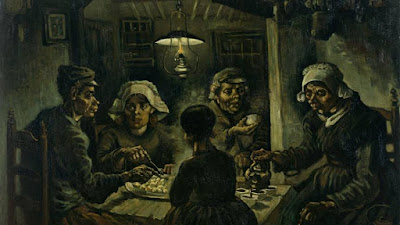 "The colors in 'The Potato Eaters' seem so applicable. Nevertheless, Van Gogh would probably be shocked if he saw his masterpiece hanging now. He did paint other colors. "It's a tragedy," artist Monica Rotgans judges. "In the beginning it was a substantially different picture and much less dark. The light source was much clearer, as well as the light on the faces.

The difference is caused by the paint with which Van Gogh worked: Prussian blue. "This is a very strong pigment, which eventually bled trough all the other colors around it. And if you also happen to be a sloppy painter and do not clean your brushes, such as Van Gogh did, at the end you find it in all the other colors. A blue haze. Put over it, a nice thick yellow varnish, and now we have green Potato Eaters.

In an era of digital images and thousands of synthetic paints, it is almost impossible to imagine how limited the palette was originally. What knowledge and tricks painters needed to get certain colors and how it went wrong so regularly.


The tube of paint existes since 1845, Previously each painter made his own paint. So before, you had to make sure you had the right components and adapt them to your needs: Thick paint, thin paint in the color that you needed. We now no longer need to do this. You need not think if anything is there.

According to Rotgans thereby, there is given far too little attention to the craft of the artist: "In education the material actually is taboo from the seventies. Now it is about the concept and the idea. Now the material is a hindrance only. Therefore, the knowledge to deliver a technically good product is hardly present in the Dutch art. This is like cooking from a cookbook; not knowing the difference between a tomato and a pepper."

The color blue is a strong example. Who today still realizes how rare that color has been for centuries? There only was a handful of substances that could yield a good blue paint and almost all of them were incredibly expensive. You could get 4 grams of blue dye from 30,000 purple snails. Or lapis lazuli from Afghanistan, where could be mined only a few months per year, under harsh conditions.

Blue therefore often was literally worth its weight in gold. Rotgans writes about the paint budget of a Burgundian king, where the color blue accounted for half of the budget. It resulted in the fact that this color was a status symbol. It was used almost exclusively to color kings, or for example the blue mantle where the Virgin Mary is portrayed in, since the Middle Ages.

Painters sometimes took refuge in blue pigments that were cheaper or less scarce. The mineral azurite, indigo from plants or smalt (crushed blue glass), for example. The problem was that these substances were less stable. If the material was not properly installed or improperly stored, irreversible discoloration followed."

Rotgans: "If you know something about all of these pigments you can mentally reconstruct how it has looked. For example, Mary in medieval art. She supposed have a sky-blue robe. If this is gray or brown, you know that there probably has gone something wrong, which you can relate to the rest of the painting.

If we look at the Mona Lisa, we see a brownish, friendly smiling woman portrait. Gloomy, little color. But if you look at the originals of the pigments, we see a woman in a summer landscape with a beautiful colored dress, a whole clear skin and eyebrows. That is an example of the paint that has gone."