Did you ever get a birthday present, for which you had to pay yourself? I did. It was an etching press. A big one. And then I mean  B I G. It had a 1 meter wide plate, that was 2 meters long. And it was heavy. It was so heavy that I had nightmares about the thing going through the floor. But it didn't.

Besides the troubles at night, it was fun working with this press during the days. It also was an attraction for my fellow artists: 'May I work with it sometimes?' 'Sure! You may.' We experienced some prolific moments.

When Hendrik and I had to move to an other house, the press was never put up again, due to too many nightmares. Finally I sold it to a young and fortunate artist who won prices with the enormous sizes she made on this press. I lost sight of her, so I cannot tell you about what happened later. But I trust her to be happy with it... No sleepless nights so far.


Making an image is suggesting. You suggest by movement and light.

The movement is your handwriting. The light is what you can leave to chance. When there is no movement, the image looks like glued to the surface. It will not jump in the eye. When there is no light, there will be no contrast. With contrast you play with movement and light.

Color plays a separate role in an image. It represents light and contrast, as well as feeling... a mood. Color leaves the movement up to you...
The feeling, the mood of colors is more established than you think. Example: The sky is blue, the grass is green. Blue is open and red is on fire. The openness of blue is compelling and red leads more to an object than blue. Where yellow always suggests light.

In the etching I gladly used color. The sepia like mix with red and nut brown has a warmth that cannot be achieved with black, for example.

Then the aqua-tint can be made by spreading resin and gluing it on the plate by making it hot. Then the plate is etched in an acid bath with hydrochloric acid. After this the plate must be cleaned with a chemical.
I repeated this process, of covering and cleaning, two times, to make an other aqua-tint and a drawing with a burin.

The cows I drawed with a burin first on a, with etching ground, covered plate. After etching it in acid and cleaning the plate, the image was completed with sugar water. After which the aqua-tint was made.

For printing you rub the ink on the clean plate, in the etched grooves. The remains of the ink must be wiped off carefully an thoroughly. It is a patient work. This is probably why I did only print two prints a day.

These etchings are made in an edition of 13. My lucky number :) 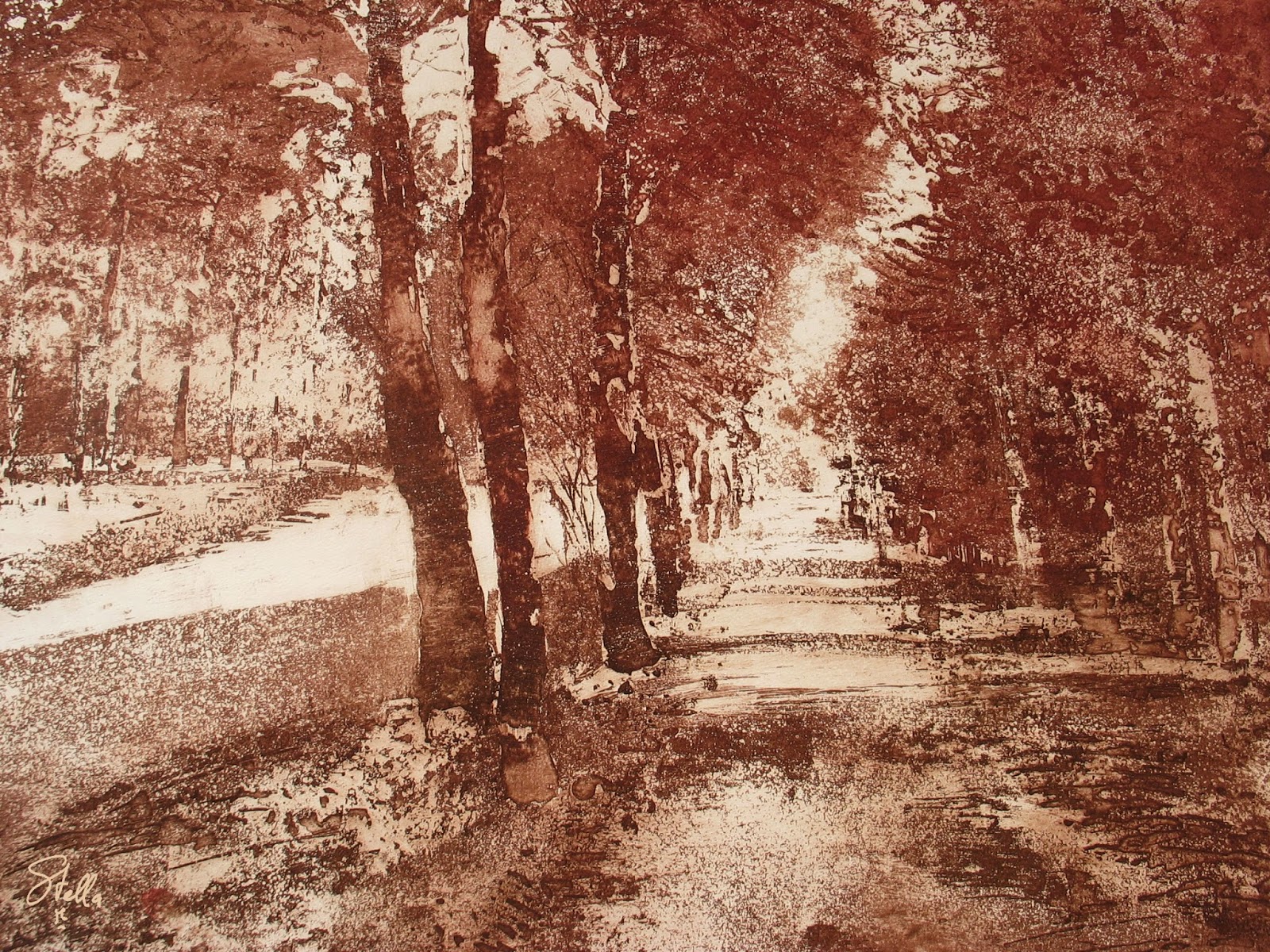 Etching is a very old craft, that goes back for ages. It has a certain romans about it. Something I wanted to learn... Lets say, it was an experience, a phase. After this I was left with a pile of toxic waste. And this bothered me. Reality won from romance.